An Invitation to Join the Heritage Society

Members of the Heritage Society have expressed their commitment to Operation Mobilization through a very special and important form of financial support. 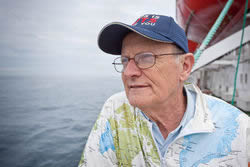 Once you complete your estate plans, please fill out our member profile form to let us know. We would like to thank you for your generosity by including you in the Heritage Society.

Your membership involves no dues, obligations, or solicitations, but it does allow us to thank you and recognize you for the plans you have made, and it may inspire generosity in others.

Benefits of membership in the Heritage Society also include annual luncheons, invitations to special events and seminars and a subscription to our newsletter.

The most important benefit you will receive from joining the Heritage Society is the satisfaction derived from making a lasting contribution to our long-term success.

"Take ownership in the Great Commission, like a stockholder does in a company, and in heaven you'll be a spiritual millionaire." - George Verwer

In 1957, George Verwer and two friends followed God's call and used their summer school break to take a truckload of Bibles to Mexico. This first mission trip was the start of the OM legacy. During the last five decades, George Verwer kept the work expanding throughout Europe, into the Middle East and India. As OM grew, George grew to be a voice for radical commitment to God.

George has continued to invest in his legacy with a vision of reaching the entire world for Christ. OM has grown from its start with three college students to a ministry of over 6,100 people from 100 countries serving in more than 110 nations. Through George's leadership and voice for missions, well over 125,000 people have served with OM and countless more have been mobilized into other ministries, more than 100 ministries have been started by people who served in OM, approximately 1 billion pieces of Christian literature and Bibles have been distributed around the world, and thousands of churches around the world have embraced God's vision for the world.

"God is seeking men and women of reckless faith today...to be reckless in your faith does not mean to be unthinking, but the reverse - concentrated, single-minded in your concern that God should be glorified and souls won."