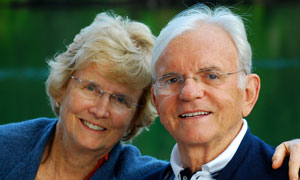 Ted and Maureen Hilton – A Journey of Stewardship

Ted & Maureen Hilton have financially assisted the Ship Ministry for many years but particularly in these past two years they have given at extraordinary levels! I’ve learned much from Ted over the years and he has a wonderful testimony of learning to give to God’s Kingdom. Recently we had another conversation about that and I’m pleased to be able to share a portion with you.

Myles: How did your journey of stewardship begin and how did you learn the joy of giving?

Ted: I think it takes time to develop the joy of giving. I know the Lord loves hilarious givers but if you’re essentially a self centered person like myself then it isn’t really there naturally. In my case, the recognition of what God requires of us and how much we owe Him was a part of that journey.

Myles: What is one of your early experiences of giving?

Ted: When I became a Christian 57 years ago, I attended a church and learned that everyone has a part to play in ministry. At the time, there were 5,000 names in the missionary book they published and I was aware that they were very vulnerable, relying solely on the generosity of free will offerings to meet their needs. So as a very young Christian, with very little money, I started to write to some of them and send money. What I sent was fairly large, relative to my income at that time and that’s how I got started.

When I was a little older, I had a business and a friend invited me to lunch with him and an evangelist named Terry Winter who had a Television program. Terry seemed to be a very sincere man doing a good job. Then my friend challenged me to give a ten thousand dollar gift to Terry’s ministry! I had two thoughts at that point: where in the world does he think I will get ten thousand dollars? And secondly, he thinks I am a far bigger man than I am!

But I took the plunge and wrote him a check for ten thousand dollars. That was far more than I had ever written to anybody as a gift. But I’ve found it’s like jumping off a cliff into water. The first time it is really scary. Once you’ve done it, the second time is much easier and then when you’ve done it a dozen times it becomes even easier. I’ve found giving is the same way, you have to get used to it.

Myles: You and your wife Maureen have invested large amounts of money into the ministry of Logos Hope in recent years to help keep the ministry going. Why were you moved to do that?

Ted: One of the reasons is that I am sympathetic to the contact Logos Hope has with multitudes of people all over the world, and particularly the poorest people. They come to the ship and get an impression of the Gospel and of Christian generosity. When I thought about the possibility of the Ship Ministry failing, I didn’t want that to happen and I felt moved by the Lord to respond. I still am pleased that I did that and I hope we can see improved fundraising for the Ship Ministry so that we can move away from the sense of cliff hanging that this, and so many ministries have.

Ted and Maureen have made a $750,000 matching grant available in 2014 to encourage giving for the ministry of OM Ships!

Why do I give?
A moment of reflection by Ted Hilton

On Logos Hope there are 400 young people living lives of inspiration. Some see that as a very good reason to keep the Ship Ministry going. Even though it is glorifying the Lord and bringing precious souls out of darkness into God's marvelous light, it would not be the first such ministry to fail for lack of money.

I know that lots of good things have failed because of my selfish inattention. So now I am trying to make up for lost time! Do I like giving away my wealth? No I am very stingy and as I give away my money I feel I lose my distinction to a degree. But I see another life just beyond this little time we have here and it impels me to support what the Lord is doing. So I cast my vacillating motives to the side and just pragmatically support what looks like God's business. He tells us that He loves a bountiful giver and I would like to have that beautiful distinguishing characteristic. Paul said of his Lord, "For you know the grace of our Lord Jesus Christ that though He was rich yet for your sakes He became poor so that you, by His poverty, might become rich.” (2 Corinthians 8:9) And God HIs Father gave Him a name above every name!

Back to all stories